When Geocities was closing, about 10 years ago, the following website was archived for posterity: 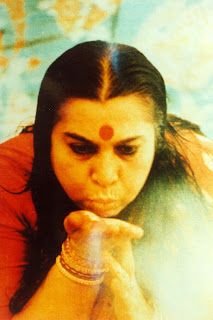 The stories and explanations below have been collected from a number of friends and acquaintances around the world, all of whom also have this very special awareness on a daily basis. We hope that you too will enjoy it, and you may easily, if you browse through the following web pages. Central to what we would like to share with you is our gratitude to Shri Mataji Nirmala Devi, who, through her gift to the world of Sahaja Yoga, makes it all possible.

'We were in Athens in October 2001. It was a warm evening and Shri Mataji was giving a public programme, an introduction to Sahaja Yoga, in a hotel there. In many traditions, one of the signs of Self Realization, or as the Christians say, the awakening of the Holy Spirit, is a cool wind or breeze. At the end of the programme, Shri Mataji gave the experience of Self Realization or kundalini awakening. Nearly all the people who had come for the first time said they had indeed felt a cool breeze, on their hands and above their heads, but some insisted it was the air conditioning. Someone went to find the hotel staff to ask them to please turn it off, and the staff, when found, said it was not on in the first place.' (M.S.)

"Can the Air Conditioning be Turned Off?"

'We were in Athens in October 2001. It was a warm evening and Shri Mataji was giving a public programme, an introduction to Sahaja Yoga, in a hotel there. In many traditions, one of the signs of Self Realization, or as the Christians say, the awakening of the Holy Spirit, is a cool wind or breeze.

At the end of the programme, Shri Mataji gave the experience of Self Realization or kundalini awakening. Nearly all the people who had come for the first time said they had indeed felt a cool breeze, on their hands and above their heads, but some insisted it was the air conditioning. Someone went to find the hotel staff to ask them to please turn it off, and the staff, when found, said it was not on in the first place.'

I am just beginning to recognize the face in the mirror, though I have seen her endless times. Know Thyself. It is in the Bible, in the Koran, in all the religious scriptures of the world. Why this should be at the heart of spiritual ascent is a mystery. As we move into the global awareness of the twenty-first century, where multi-culturalism is an everyday occurrence, and Anglo-European rationality meets eastern mysticism, what happens to this journey of self-knowledge?

The subtle realm is no longer the exclusive domain of eastern philosophy. Physicists all over the world are now doing research into unseen dimensions, illusive quarks and vibrating strings of energy. Yoga classes are as American as apple pie. My own personal story of cultural and self-integration began twenty years ago, when, as fate would have it, I found myself in the Himalayas, a Jewish girl a long way from home, learning to meditate.

I was on assignment for the Jaipuri Times of India. My husband, one-year-old daughter and I were staying on the family estate of an Indian lawyer in the foothills of the Himalayas. I find India to be a deep and aesthetically beautiful culture, albeit with social problems we are lucky enough not to have.

What it lacks in material comfort is made up for in the generosity of the people, and the general feeling of glee inspired by walking down a street in the company of two camels, three cows, an elephant and a wall mural that is probably a thousand years old. Once you start gaining altitude, the terraced slopes are dotted with wild goats and stone huts, and ringed with dense jungle. The mountains tower up all around, surreal; misty-peaked and sharply etched against the sky. Our friend had just met an extraordinary woman, Shri Mataji Nirmala Devi.

(Mahatma Gandhi had sought her advice as a child; now, as the founder of Sahaja Yoga meditation, she has become Spiritual Mother to millions.) In 1981, Sahaja Yoga was slowly growing in India, attracting the attention of restless westerners like us, searching for a spiritual place to call home.

I took to it right away. One unusual aspect that struck me was that Sahaja Yoga starts with the awakening of the spiritual energy Kundalini and self-realization, instead of ending with that. Traditionally, first one's chakras are completely cleansed, which takes ages, and then the Kundalini rises. Maybe. Old-style gurus used to pass on this experience to one or two disciples at most, after years of arduous lessons and privation. Offering this experience right away is pretty outrageous; it implies a bunch of normal people walking around in an awakened state, not just saints living in caves who have practiced severe austerities for lifetimes. The premise is that once you have the light inside yourself, you can see your own problems clearly, and are then better able to work them out. You get in touch with yourself. More than that, the process is expedited, so what used to take people five or ten years to figure out, can be seen much more quickly through meditation and introspection. After learning about Shri Mataji's meditation, I was lucky enough to go to her house in Delhi.

I was standing in the doorway, holding my infant daughter in my arms. Putting her hand lightly on my shoulder, Shri Mataji's eyes sparkled as she said, "Kundalini has risen. They've both got it." It was a fabulousfeeling, like a cool breeze blowing gently over the top of my head.

The basics of Sahaja Yoga are simple. There is Kundalini, a spiritual energy. There is the subtle system of energy, chakras (a Sanskrit word meaning "spinning wheel") and the three channels of the autonomous nervous system. It's not hard to understand. The truth of the matter is that all of our quirks and problems and all of physical reality can be addressed at the level of energy.

Reality is what it is; energy once created is never destroyed…so once you have an understanding of how you are put together in this way, you can really get down to the business of self-knowledge. For example, let's say you suffer from chronic guilt syndrome. Jewish? Catholic? Whatever. That particular problem involves the chakra located on the left side of the neck. By working on that spot, you can really alleviate the problem. Moreover, you start having insights into the inner workings of the situation, and as things start to become clear, you become more and more the master of the situation. Most importantly, you start to transform yourself
from the inside out. You can begin right now. Close your eyes, and imagine a coiled up twist of silken energy threads at the base of your spine. (The Greeks called this the sacrum, the sacred bone: they knew what they were talking about.) Now ask yourself, do you want this energy to waken? Ask yourself the question, "Am I the pure Spirit?" Now hold your hand over your head. Do you feel a cool breeze coming out at the top? This is the Kundalini, newly risen. Now, you've got it.

After my meeting with Shri Mataji in India, I had another serendipitous moment. I was in Jaipur, riding in a horse-drawn wagon with my daughter on my lap. On the sidewalk market, among the red and purple turbans, the richly hued saris, the shining brass plates hanging mirror-like behind pyramids of oranges and mangoes, there appeared a young Muslim woman covered from head to toe in swaths of cloth. A black cotton scarf covered her mouth. Only her eyes were revealed to the world. These eyes caught mine, and my breath as well. We were from completely and utterly different worlds. Her life was unfathomable to me, and mine to her. Yet here we were, on the same side of the world, the same street, the same square hundred feet of red Indian earth between us. Somehow for a fraction of an instant, we made a connection. Everything, the barefoot children laughing behind the long silken braids of their mothers, the cows and camels sauntering insolently among the chaos of India, the fragrance
of earth and incense and spice, everything blurred into formless color, leaving the two of us alone in sharp relief. I could barely breathe. Then she did the outrageously unexpected, an act of
courage: she undid her scarf so that I could look directly into her face.

Her face was one of the most beautiful I have ever seen, by any standard of beauty. What could I do? Wave, or yell out? I could only stare back at her, and it seemed as though she looked triumphant. I felt her femininity, her strength. Her look said, "I may be bound in cloth and fierce tradition. But inside, I am intelligent and present. I want you to see, that, to see me." In one blinding moment our cultures collided, and then it was over. The horses clopped on, we turned a corner, and she was gone. I ponder that moment sometimes. In one way its meaning has remained a mystery, like an archetype, as pure and necessary as a prime number, too deep to plumb. It is evocative, however. As we two made a connection, so a bridge needs to be built, and then crossed, between borders and boundaries, linking us all together. The spiritual path finally is not about eastern mystical paradigms meeting western rational thought. It is about self meeting Self, across all cultural values and interpretations. In today's world, we must bind our hearts to a new pattern, an integration of east and west, giving birth to a modern world free from fear. It will take intelligence, and great courage, to gain possession of our collective ascent. Yes, it is time to drop the veils that blind us to our essential self, that place where we are one beyond individuality, beyond cultural definition. Change is possible. The intelligent beauty of that young woman's face comes back to me clearly now. Her challenge to me is one I put to the mirror, to the face I am coming to recognize, to my daughter grown so quick and fine, to get to work, connect to life, and hurry up! For time waits for no man, or woman, no matter what color earth lies under their feet.

Creative Commons Licensed Photos by Nagesh Kamath, Soqotra (Yemen)
Posted by LiXR at 7:31 AM No comments: