This is very nice! Shri Mataji requests Durga bhajan on completion of the first bhajan! Ah!

BTW, it was the birthday of Mahatma Ghandi, the one of the most brave persons to walk this earth.

History will be made in March 2007

Shri Mataji's birthplace will be the venue of Her birthday celebrations in 2007 as per the SY India circular. 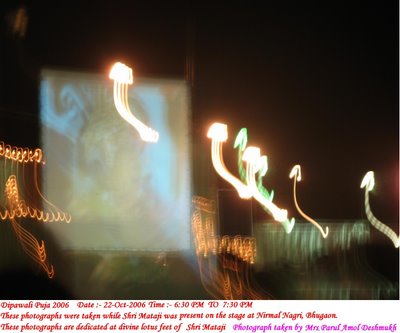 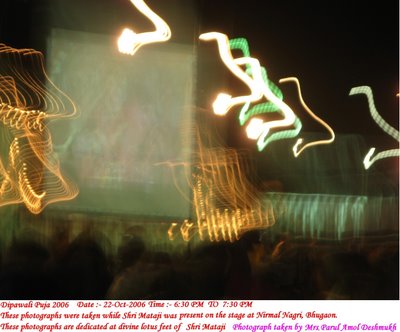 Sahaja Yoga Picks up in Morocco in just a few months... It was amazing when the first seeds sprouted when Shri Mataji was on Her way to America. And now...

SPEAKING IN THE PRESENCE OF GOD

I was one of the blessed sahaja yogis on the September 2006 Morocco Tour. When I arrived in Casablanca, my first concern was how to speak in french. I had learned some french years ago, but had never been fluent, nor ever used it in the last 15 years. To recover, I had taken a month of courses before coming to Morocco, but it was almost an issue for me, that how will I be able to speak..

Well, I arrived at the Hotel de Paris, said “Bonjour” to the receptionist, to my surprise I found that I could speak and he actually understood what I was saying. At first I thought I am doing something special, but it was not, not special, it was a natural thing, and so this new ability became natural in me. I felt like a bird flying for the first time! The wings and all, everything was there, and it was happening!.. It was so nice, so nice a feeling, yes I can speak now, and it’s ok now. I enjoyed it. It felt like, you see, Shri Mataji can make you do things, and you need not be afraid whether you can do it or not. Because She is there, God is there. That was it.

In fact, throughout the nine days I was in Morocco, that was the major experience I was having all the time, everywhere, with seekers, with sahaja yogis, alone.. The presence of God was so much there.

Those of us who have had the chance to be in Shri Mataji’s house will know this, it’s like She is so much there, so much in everything. You breathe in, and Her love fills your lungs and fills your heart, and you breathe out, you dissolve into the surrounding as you have become one with that love. And you look across to another sahaja yogi and you see that they are in it too. Everything merges, and your heart is so full, you feel only the gratitude that She has let you be there, but can’t even say it, you are so full of it. Such a satisfying, such an absolutely satisfying state it is.

With that kind of a heart we went to the public programs, and we found seekers who had the same heart full of love. You can’t imagine the joy it gives, to see that in these far fetched cities of Casablanca, Marakesh and Rabat we found that that is where our hearts are opened, and that is where we found people with open hearts.

The Moroccans are amazing people. Each program at Casablanca, Marakesh and Rabat.. Words fail, but I will try to give you an idea.

The programs usually began with a few bhajans – as David at the guitar and Irene at harmonium began, the sahaja yogis were transported to a higher realm, that this is The Self Realization in the land where Allah is worshipped, like mountains, watching and witnessing, we were there to see the Divine work take place. Everyone seemed very aware, most of all the seekers, they seemed to be very aware of why they were there.

As soon as Bernadette (and Marie Martine at the final program) started speaking, the whole attention was on her. Completely. I have never seen programs like this before. They absorbed whatever was told, one could see that, the lecture, the meditation, the music, everything.

At the last program in Rabat, when Bernadette said now we will start the self-realization experience, someone among the audience asked if they can come and sit on the floor. Bernadette said, “yes, of course if there are any people who want, they can come and sit on the floor.” Instantaneously, maybe 60-70 percent of the people stood up and started coming to the stage to sit on the carpet!.. It was specatacular. Those who were sitting also came forward and sat on the front rows. Nobody wanted to miss a thing, they were there for their realization and it was clearly valuable for them.

A unique phenomenon, at many programs, after about 45 minutes to 1 hour of starting, when Self Realization is about to begin, a new group of 20-25 people arrive and join in. Then in some places, people continue coming in large numbers, very late also, after 1 hour, 2 hours. At the end of program. And they stay too, in Rabat there has been a time when all the fourteen sahaja yogis were busy giving realization to late arrivals in small groups at different corners of the hall, after the program was over!.. To me it seemed like because they are sensitive to vibrations, when the Self-Realization is done, the seekers who are not in the hall sense this event and come by that power.

As we sang bhajans young people came and sat with us on the floor also, they sang along with us, some clapped, some meditated while listening, a few of them danced. In Casablanca at the end of the program when Irene asked them if they would like to sing a song of their own country the reply was “No, those things we hear all the time. We prefer to sing from your songs. Can we sing the Ganesha Ganesha again?”

When the programs were over, nobody left the hall. They sat with us, asking questions, learning, chatting, laughing, enjoying. Once we had to vacate the hall upon the kind reminder of hotel management – nobody wanted to go!..

The question from the university students was, “When are you going to come again?” and “How can we learn this meditation better?”

We really saw and learned from them – the beauty of Sahaja Yoga once more.

On the train I had spoken of my experience when I first met Shri Mataji in Cabella at the Guru Puja of 1997. In fact, that time I had felt a little sad because at this first encounter I had wanted to experience Her Presence, but had not been able to feel much.

When our train landed in Marakesh and we got down, something in the perception began to be increasingly different. I had the impression it must have something to do with the vibrations of the city. Meanwhile, I started pondering over this subject because to meet Shri Mataji for the first time means to really meet Her, and if I had not been able to feel Her that day, it means I did not meet Her then. So when did I first meet Her? I wanted to remember when was it that I had felt Her for the first time, and where.

That instant I remembered one meditation I had had, very long time ago about nine or ten years back, in my home in Ankara. I vividly remembered that meditation. I was sitting across a small photograph of Shri Mataji, and I was feeling that I am nothing, and She is so Wonderful. I remember I was silently praising her. And then as if She was answering me I had felt very strongly that She is in my heart, inside of me. It was as if all the praises that I had offered Her, She had put them in me. And She really was there, in my heart.

Although I always knew I had a memory like that, I had not thought of this much. But there, when I asked myself the question “when have I actually met Shri Mataji”, I found the memory of that meditation come to me. It was like a realization with much more than words could express. The whole thing came back to me, but this time with a full intensity and before I knew it I was carried into my heart, She was there, I felt Her presence absolutely there. I could feel the whole of the heart, (not only the left, but on a wider area covering left, right and center) and I felt myself dissolving outwards from there. It was very curious, as if I was thinner than the surrounding things, so when I walked about I could feel that I am partly passing through the surrounding. People, furniture, walls, anything. And when I was passing like that I could actually feel about the things.

Now this state lasted for a couple of days. I am an architect by profession. On the second day evening in Marakesh, we went to a certain historical building called Palais de Bahia. There I went along with our sahaj group, and I was surprised because now I could actually feel a lot more about the building. I had a sort of an insight, and I felt everything touching my heart because my heart had expanded. The building felt familiar. I was not thinking anything, but I was almost looking at things through the heart.

An interesting and fascinating way in which messages are brought to the masses. Here is a beautifil instance...

Mohanlalganj &at Nigohan a public program will be organised at the end of yatra.Pray to Shri Mataji for

the success of the program

[via Sanjay Saxena in India]